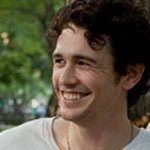 James Franco grew up the oldest of three brothers in Palo Alto, California. “I did a lot of painting when I was a kid,” he explains, adding that he’s graduated from coloring between the lines to his own style of artistic expression.
Franco started acting in high school. “My girlfriend was in the drama club. Some geek wrote a romantic one-act play and asked her to be in it, and they made out onstage. I begged her not to do it, but she did it anyway. So, to get her back, I joined the drama club.”
After working in the drive-thru at McDonalds, Franco landed roles in the mini-series To Serve and Protect (1999), and the Drew Barrymore feature, Never Been Kissed (1999). From there, he was given a role on the TV sitcom, Freaks and Geeks, playing the so-laid-back-it-hurts Daniel. Unfortunately, despite strong reviews, the show never found an audience and was dumped by the network. However, Franco bounded back with a starring role in the teen comedy Whatever It Takes (2000), followed by roles in other major Hollywood releases such as the blockbuster Spider-Man (2002) and City By The Sea (2002), opposite Robert De Niro. In 2002, he won a Golden Globe when he appeared in a role tailor made for him—that of James Dean in the TV movie of the same name. Several years later, he turned in a critically-acclaimed performance in Milk (2008) opposite Sean Penn, for which he won an Independent Spirit Award and a Broadcast Film Critics Association Awards with the rest of the cast for Best Ensemble.
Offscreen, Franco, who was named one of People Magazine’s 50 Hottest Bachelors in 2004, is an artsy loner—by his own confession. When not in front of the camera, he enjoys writing screenplays.